A 1500 years old church is found in Karabük 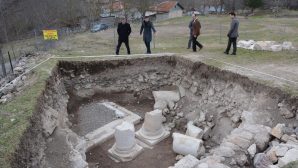 One of the earliest churches of Anatolia is discovered in the Hadrianaupolis Ancient City in the town of Eskipazar, which was established in the 1st century BC. and is estimated to be used for settlement until the 8th century AD.

The remains of Stylianos Alypius, one of the most important clerics of the Christian world, were discovered during the excavations in November and December at the ancient city of Hadrianoupolis in Eskipazar, within the borders of the Budaklar Village and which is called Zeugma of the Western Black Sea.

The mosaics and important figures were found out and they are dated as 1500 years old. Karabük Provincial Director of Culture and Tourism İbrahim Şahin, the assistant director of Karabük University Archeology Department. Assoc. Dr. Ersin Çelikbaş, Eskipazar District Governor Huseyin Remzi Konak and Mayor Mustafa Yarkan did inspections on the archeological sites.

Ibrahim Şahin, Director of Culture and Tourism said that excavation works are being continued since 11 years and if the 10% portion of the Ephesus ancient city was revealed after 100 years of excavation, the work in Eskipazar would endure still more years.

Eskipazar District Governor Hüseyin Remzi stated that the ancient city has a great potential and it would be found very interesting for its mosaics, while the Mayor Yarkan said that it would be a great treasure for Turkey.

Assistant Prof. Ersin Çelikbaş who is the excavation officer and scientific advisor from Karabük University said that the church is dated 1500 years old during the excavations they conducted in November and December.

Stating that the church revealed in the excavations through the georadar was one of the earliest churches of Anatolia, Çelikbas said that it would be dated to the middle of the 5th century AD. He said that it reflects the characteristics of the early Anatolian church architecture and there is an important aspect of this church, as an important personality of the early Christian age, by the name of Stylos Alpius, one of the column saints was born and dead here. Ancient sources related to Eskipazar mention the existence of two monasteries here, one for males and other for females. male and female monasteries.  Acording to Çelikbaş, most probably they will find out these monasteries too.

“Very important for the Christian world”

Çelikbaş pointed out that the uncovered church had a length of about 20 meters and that it had also a beautiful flooring, saying: “we found very important figures in mosaic. Hadrianoupolis is a great ancient city. It was crowded since the 4th century AD. Stylianos Alypius was born and died here We know that Christians were going to Constantinople after coming to the port of Amasra and visiting Hadrianoupolis. This was the pilgrimage route. Hadrianoupolis also had important Christian buildings from this period. We have found that these constructions have a width of 20 kilometers from the core center of the city. We will support these archaeological data through these studies. Hadrianoupolis has the most important archaeological position of the Western Black Sea region.”

Fasting period activities in the Orthodox Church of Antioch