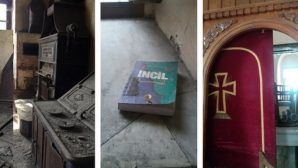 The Bible in front of the window of the church of Darülaceze, which is located in the most central position of Istanbul and which is kept in simple architecture and welcomes its guests with its spacious and well-kept garden shaded by centuries-old trees, is perhaps interpreted as “the most lonely” one.

The most mentioned feature of Darülaceze is that there are worship places of different beliefs next to the church in its garden. This spatial arrangement has also led to the perception of Darülaceze as a place of prestige.

As it is known, this hospice is also mentioned with its founder Sultan Abdulhamid. The project and the implementation of this institution were realized by the chief architects of the Ottoman palace Yanko and Vasilaki. Sultan Abdulhamid required, from the beginning, the presence of representatives from the Rabbinate and the Christian Patriarchates. He also wanted that in the Board of the hospice there would be representatives from the Greek, Armenian, Jewish and Catholic communities.

Within the statute of the opening, three different priests representing the Catholic, Orthodox and Gregorian communities and the representatives of other faiths were appointed.

And these requests of the Sultan came true when the hospice of Darülaceze is opened in 1896. According to the information given by Afife Batur in the Encyclopedia of “Dünden Bugüne Istanbul” on Darülaceze, six neo-bizantine icons were sent by the patriarch to the church and the painting workshop director Fr. Georges, placed the icons in the church together with the architect Vasilaki.

Today the church in the garden of Darülaceze is abandoned and draws attention with its saddening situation.

The worst part of this view is perhaps the “most lonely” Bible which is in Darülaceze, standing alone in front of the window…

This Bible, which is covered by dirt and dust shows that it has not been touched for a long time. It is waiting for those who will open the door of the church whose on the door it is written “The Church of St. George of Darülaceze”.

However, a report on the website of Darülaceze which is published in 2013 by the Undersecretary of the Ministry of Family and Social Policies promises that “the restoration of the church and other places of worship will start within one month and the restoration of all the buildings will be completed in the autumn.”

In the summer of 2018, we witness that the restoration is completed in the other buildings but the church.

Catholics of Iskenderun started the Lenten period with Ash Wednesday

Christmas Tree Gifts to Churches from the Metropolitan Municipality of Antioch

A 1500 years old church is found in Karabük