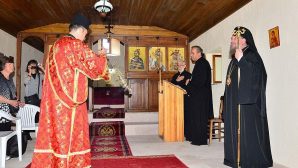 A special mass took place in the Ayazma Monastery located in Bozcaada province of Çanakkale, with the participation of Orthodox believers coming from abroad as well as Gökçeada due toSaint Paraskevi feast.

With the participation of the Orthodox believers who came together in the Monastery of Ayazma, the Aya Paraskevi Day was celebrated. Members of the Greek Orthodox community from Greece, the United States, Australia, Italy, France, Canada and Gökçeada came together at the Ayazma site, which isknown with the name of ‘Ayazma Panayırı’ among the local people.

The Greek Orthodox faitful gather every year on July 26 at the Monastery of the Ayazma, and attend the mass for this feast.

The liturgy and the traditional feast celebration in the historic monastery was led by the Bishop of Edirnekapı Aya Yorgi Church Eritron Kirillos. Bozcaada Metropolitan Kirilios Druganis also attended it. A large number of Greek Orthodox community members attended the ceremony. During the mass, the people prayed for those who lost their lives because of the forest fire disaster in Greece. The entertainment section of the feast is cancelled.