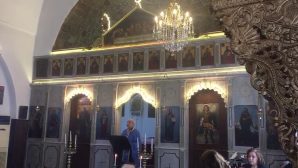 All the prayers in the mass of Sunday, March 17 at the Greek Orthodox Church in Mersin were dedicated to Muslims who were killed in the New Zealand terrorist attack.

The parish priest of the Mersin Orthodox Church and members of the Board of Directors of the Foundation accused the attack on innocent and prayed for of God’s mercy for those who lost their lives.

The parish priest of the Orthodox Church of Mersin Rev. Fr. İspir Teymur said “the innocent people who were worshipping in the mosques were massacred. This abominable event has shaken everyone, and we are living this great pain. As Christians of Mersin, we strongly condemn this action. Terrorism has shown its ugly face. We believe that such terrorist activities will never prevent the world peace.”