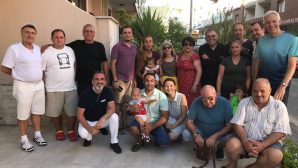 During his speech at the opening ceremony, Pastor Levent Kınran said that the representative office in Marmaris is a blessing for the faithful, drawing attention to the fact that Christians were in difficulty for finding a place of worship because of the small number of churches in Mugla and surroundings. The reppresentative of the Anatolian Protestant Churches Association in Marmaris, Arif Sercan Ankara stated that there are many people looking for churches in Marmaris and there was a need of such a place of worship.