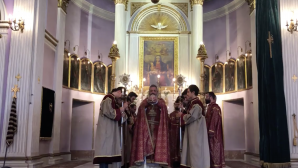 The Holy Liturgy which took place in the Armenian Apostolic Church in Boyacikoy was presided by the Reverend Şirvan Mürzyan.
The celebration which took place in Surp Kevork Armenian Apostolic Church in Samatyawas much more meaningful, because in the same Sunday, the great philanthropist Mikael Hagopyan who contributed a lot to the construction of the church and many other Armenian institutions was commemorated. The celebration was led by Bishop Sahak Maşalyan, the President of the Religious Council of the Armenian Apostolic Church of Istanbul. At the end of the Holy Liturgy, Bishop Maşalyan gave a sermon of the founding of the Holy Cross in Jerusalem and the personality of Mikael Hagopyan.

WHO IS MIKELEL HAGOPYAN?
In the fire of Samatya district which took place in 1866, Surp Kevork Church and its adjacent Sahakyan Nunyan and Vartuhyan Mixed Schools turned into ashes.
Thanks to the financial support of Mikael and Hovhannes Hagopyan brothers in, the church and the school could be rebuilt. The architecture was Bedros Nemtze. Mikael Hagopyan spent 15 years at the Pırgiç Armenian hospital as manager, built some of the buildings of this hospital complex, paid 8,000 gold for the loan of the Theological Seminary of Armaş, helped several times the Armenian Community in difficulty. He is buried in the garden of the Surp Pırgiç hospital. He is being  commemorated here with prayers since 1904.