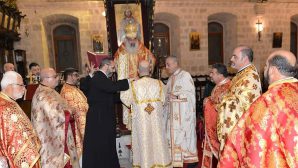 Latakia Metropolitan Athanasyos Fahd came to Antioch for a series of visits. Fahd was greeted with a crowded delegation at the Yayladağı Border Gate, then he went to Antakya and attended the dinner at the Antakya Orthodox Church.

On the evening of Thursday, in the presidency of Metropolitan Athanasyos Fahd, a ceremony was held in the Orthodox Church of Antioch on the day of commemoration of Saint Arhcangels Michael and Gabriel. At the same ceremony, Lebanese Balamand University graduate Abdullah Papasoğlu was ordained deacon.

In addition to metropolitan Fahd, the parish priests from Antioch, İskenderun, Samandağ and Altınözü Orthodox Churches also attended the ceremony. The metropolitan Athanasyos Fahd personally dressed Abdullah Papasoglu , who will be assigned to the  Church of St. Peter and Paul in Antioch. Abdullah Papasoğlu’s priesthood ordination will take place on November 12 in the district of Sarıyer Altınözü. (SAT-7 Türk / İlyas Edip TERBİYELİ-İskenderun)

Prayers for Turkey from all over the world
ZİYARETÇİ YORUMLARI