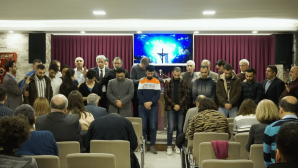 Hakan Taştan, the Pastor of Cankurtaran Churches, stated in his opening speech that they had been praying for years to open a church in Gazi District and were thankful that they finally realized this dream.

In the worship directed by Eşay Taştan, Christian faithful glorified God with hymns and prayers. After the worship, some church leaders serving in Istanbul gave speeches.

Pastor of Şişli Dirisu Church Bedri Peker started his speech by reading the verses from the Bible, John 4: 27-38. He encouraged the participants to become witnesses of their faith, taking the examples of the disciples and their conversion.

“Just then his disciples returned and were surprised to find him talking with a woman. But no one asked, “What do you want?” or “Why are you talking with her?”

Then, leaving her water jar, the woman went back to the town and said to the people, “Come, see a man who told me everything I ever did. Could this be the Messiah?” They came out of the town and made their way toward him.

Meanwhile his disciples urged him, “Rabbi, eat something.”

But he said to them, “I have food to eat that you know nothing about.”

Then his disciples said to each other, “Could someone have brought him food?”

“My food,” said Jesus, “is to do the will of him who sent me and to finish his work. Don’t you have a saying, ‘It’s still four months until harvest’? I tell you, open your eyes and look at the fields! They are ripe for harvest. Even now the one who reaps draws a wage and harvests a crop for eternal life, so that the sower and the reaper may be glad together. Thus the saying ‘One sows and another reaps’ is true. I sent you to reap what you have not worked for. Others have done the hard work, and you have reaped the benefits of their labor.”

After Pastor Peker, Kadıköy Anatolian Protestant Church Pastor Gürkan Çamsun started his speech by giving examples to the message of the angel to the Church of Ephesus, one of the 7 churches mentioned in the Revelation. He emphasized that the newly opened church in Gazi District was the only church in the region like Ephesus and said that God is with them, he would bless this new church with his Spirit; “We must continue to pray for the brothers serving in Gazi District” he added.

İlyas Devli from Zeytinburnu Church of Jesus Christ stated that each brother was chosen by God. Hakan Yıldırım, one of the leaders of the Church of Gospel of Salvation, prayed that may the Lord’s life-giving Spirit and the new children of God come from the four corners to Gazi District.

Pastor Muharrem Bilgic from the Istanbul Elmadag Church said “We are the temple of the Lord. This is the prayer house of the Lord. Let’s move to a bigger place next year.” Turhan Üstün, one of the preachers of the Church of Zeytinburnu read the verses of 1. Timothy 2: 1-6 and said that the new church should be the salt and light of God.

I urge, then, first of all, that petitions, prayers, intercession and thanksgiving be made for all people—  for kings and all those in authority, that we may live peaceful and quiet lives in all godliness and holiness. This is good, and pleases God our Savior, who wants all people to be saved and to come to a knowledge of the truth. For there is one God and one mediator between God and mankind, the man Christ Jesus, who gave himself as a ransom for all people. This has now been witnessed to at the proper time.

The pastor of the Church in Başakşehir serving to Syrians explained how he was healed hy God. Habib Anlı, one of the leaders of the Church of Christ Believers of Zeytinburnu, said, “May your love for each other be joyful, and your love for the souls who will join you be joyful. Always have mercy on them like a father’s heart.”

After the words of encouragement of Habib Anlı, all the leaders and participants prayed for the people who will serve in the church in Gazi District.

After the prayers, all participants shared a meal together.