Celebration of ‘Easter’ by the Antiochian Orthodox Churches 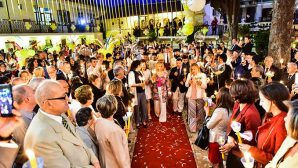 The Easter Day, which is the great holiday of Christians, meaning the resurrection of Jesus Christ from the dead, was celebrated with enthusiasm by the Orthodox faithful living in Antioch. The mass in the St. Peter and Paul Church in Antioch held in the garden section was quite colorful.

The Christians arriving to the church in the very early hours in the morning prayed and lighted candles. The mass was led by the Bishop of Selefkiya  which depends on the Patriarchate of Antioch, Patriarcal Vicar  Efram Maluli was accompanied by Church Leaders Jan Dellüler and Dimitri Doğum.

Peace messages were also given during the mass. The celebrations continued in the church garden where a confetti demonstration took place. After the ceremony, the members of the congregation met at the breakfast organized by the Church Foundation and shared the feast of joy by tapping eggs.

Participation of the protocol to the breakfast

During his speech, the President of the Orthodox Community Foundation Fadi Hurigil said: “Antakya is the city which celebrates Easter Day with a particular enthusiasm and makes feel the Easter while walking on its streets. Antakya is the city which whoever was born in it and migrated from it comes back to celebrate this feast. Whatever our origins, beliefs and philosophical views are, our brothers and sisters share their traditions and customs in this world of violence and hatred.”

Awakening Youth Group Did The First Meeting of the New Year

A Fasting Meal is Organized Before Easter in Iskenderun
ZİYARETÇİ YORUMLARI