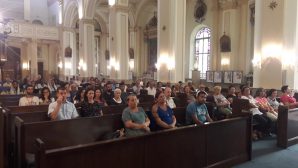 The Feast of the Ascension of the Virgin Mary, one of the great holidays of the Christian world, was celebrated with enthusiasm in all over Turkey.

This feast is also known as the Feast of the Holy Asdvadzadzin, one of the five major feasts of the Armenian Churches. On the eve of the Feast, (on 14th August) which is popularly known as the Grape Feast; Archpriest Hayr Vartan Kazancıyan presided a Holy Mass in the Armenian Catholic rite, which was hosted by the Archbishop of Izmir Mgr Lorenzo Piretto at the Cathedral Basilica of St. John the Evangelist in Izmir. Archdeacon Agop Minasyan and Gisasargavak Jan Acemoğlu, the Surp Hovhan Vosgeperan Choir led by Zaven Agay, the community of the Armenian Catholic Church coming from Istanbul and believers from Izmir and the surrounding provinces attended the service.

In Ephesus, at the House of the Virgin Mary, for the occasion of the Feast of the Ascension, the Holy Mass was presided by Monsignor Paul Fitzpatrick Russell, the Vatican Ambassador to Ankara on 15th August, where the chorus of the Surp Hovhan Vosgeperan Church performed Gomidas Vartabed’s hymns in Armenian.