Culinary Course for Women at the Vakıflı Village 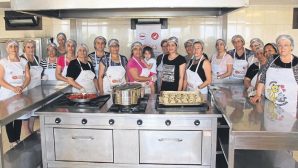 The Armenian women living in the village of Vakıflı are attending a culinary course for becoming assistant cooks organized by the “Ministry of Development, Social Support Program (SODES)” and  the Armenian Orthodox Church Foundation of Samandağ Vakıflı Village.

Within the scope of the project, which is supported by the Governorship of Antioch, 30 trainees learn to practice various dishes from both Turkish cuisine and world cuisine. Samandağ Armenian Community and Samandag Vakıflı Village Armenian Orthodox Church Foundation President Cem Çapar said that his aim was to make them more successful individuals in the social life by providing opportunities to the disadvantaged groups in the countryside.

Cem Çapar stated that UNESCO has declared the city of Antioch world’s 26th gastronomic city; “We have opened a culinary course in our village in order to help the disadvantaged groups, women and the unemployed people. The Ministry of Development and the Governorship of Antioch supported our project. This is a project of the Samandağ Vakıflı Armenian Orthodox Church Foundation which received 198 thousand lira from the government.

Sevgi Gülşen, who worked as a master instructor in the project, said that they had a very productive and entertaining work, and they enriched the local cuisine with international recipes thanks to the courses they started on January 26th.

Anayis Karton (65 years old) who is one of the participants said: “We learned the dishes we did not know before. We are very happy and we thank SODES. We learned a lot of different dishes.” (SAT-7 TURK / İlyas Edip TERBİYELİ-İskenderun)

The Protestant Churches’ Association of Turkey posted a congratulatory message for the election of 85th Armenian Patriarch, His Eminence Sahak Mashalyan

A Young Person With Cross Necklace Has Been Attacked In Gebze