Day of Finding the Bones of Surp Krikor Lusavoriç 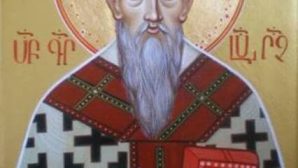 In the Armenian Catholic Congregation in Istanbul, a ceremony that was closed to the public due to coronavirus, was held in Taksim Vosgeperan Church for the Festival of Finding the Bones of Surp Krikor Lusavoriç. The ceremony, under the leadership of Archbishop Levon Zekiyan, was accompanied by the Taksim Church clergies and hymns of the choir that was conducted by Zaven Agay.

Due to the spread of Christianity among the Armenians, the relics (bone fragments) of Surp Krikor Lusavoric are of great importance for all churches. Due to the presence of relics every year, rites are held in Armenian Churches.

Aziz Krikor Lusavoriç, whose name means “enlightening”, was born in the city of Etchmiazin in Armenia in 257.

With King Dırtad, who recovered and was enlightened by the preaching of the Bible, the entire palace men were baptized. The church, which was secretly underground in cooperation with Surp Krikor Lusavoriç and King Dırtad, also emerged on earth and the religion of Christianity was declared as a free and official religion by the state in 315.