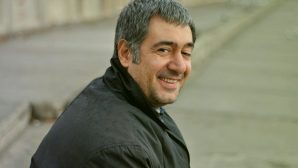 Famous Actor Melih Ekener, who acted in Turkish comedy movie series Hababam Sınıfı and Maskeli Beşler and who is also the Executive Director of SAT-7 TÜRK Television Channel wrote a book entitled “The Graces of Another World” was published by Sola Unitas Academy.

The press launch of the book in “The Graces of Another World” which you will find in all the bookstores soon, will be held at the Trump Culture and Show Center, after the “Tamamla Bizi ey Aşk” theatre play in the same place on Friday, December 14 at 20:30, which will be performed by Ali Poyrazoğlu, Şebnem Özinal and Melih Ekener himself.

The Turkish theater actor Melih Ekener, who acted as Bebe Ruhi in Hababam Sınıfı, has been showing his writing talents since his very young ages, wrote in many humor magazines like the Çarşaf and wrote a children’s play in the Sabah Newspaper. He is also the author of many television programs.

Now, he is sharing what he collected in these years, his stories, experiences and beliefs in a philosophical and fluent way through this book.

You will read this book which is illustrated by the famous cartoonist Mesut Ekener, over and over again.