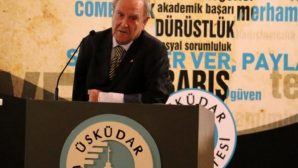 Famous dermatologist Professor Agop Kotogyan, known as “Armless Agop” (because he had a single arm) passed at 79 years old. He was one of the most important skin specialists Turkey.

Who was Armless Agop?

Professor Doctor Agop Kotoğyan; after graduating from the elementary school, he worked at a silver workshop and got his arm into the press machine, the doctors said that he could not live. He stayed in a coma for days. It was known by the name of ‘Armless Agop’ because he was lacking one arm because of this accident. In 2005, he described this accident with these word: “Before the accident I had in 1952, I was using my right hand like most people. When I lost it, I worked hard to be able to work with my left hand. Within two years, I have become able to do everything alone without help from anyone…”

Professor Hagop Kotoğyan who continued to live in Turkey despite receiving offers from many universities from many. To the question of “Why didn’t you leave?”, Armless Agop used to reply: “To love a country does not mean to love the good days you have spent in this land. The love of homeland means being here on good day and bad.”

He was among the most earning 20 doctors

Having published more than 300 articles in the international journals, Kotoğyan was not able to look after his patients for the last 1 year due to health problems. According to a research of the Turkish Time magazine, Agop Kotoğyan who paid 419 thousand TL in 2015 was among the most earning 20 doctors in Turkey.

Selina Dogan announced the death of Armless Agop in Turkish and Armenian on Twitter. CHP Istanbul deputy Selina Dogan said: “one of the most valuable dermatologists that our country raised, Prof. Dr. Agop Kotoğyan or ‘Armless Agop’ passed away. May he repose in pease. Asdvads hokin lusavore.”

The Celebration of the Passion was done in Iskenderun, led by the Patriarchal Vicar Efram Maluli