Feast of the Glorification of the Holy Cross Celebrated 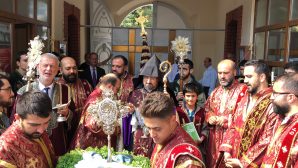 Armenian Apostolic Churches in Turkey celebrated the Feast of the Glorification of the Holy Cross on Sunday September 15th with special rituals.

Surp Kevork Church in Samatya who has been opened after 3-month renovation period hosted the ceremony of the Feast of the Exaltation of the Holy Cross, under the auspices of the Armenian Patriarchal Locum Tenens Bishop Sahak Mashalyan. During the ceremony, the holy sacrament has been offered by the parish priest Rev. Zohrap Civanyan. Following the morning prayers by Father Zohrap Civanyan and the church Deacons and chorists, Father Civanyan offered the sacred sacrament while his assistant at the altar was Senior Deacon Hacik Sarili. The deacons and chorus of the Saint Kevork Church accompanied Rev. Civanyan. The chorus of Samatya Surp Kevork Church choir performed under the conduct of Sevan Agoşyan during the ritual presided by Bishop Sahak Mashalyan. In his sermon, Bishop Mashalyan underlined the history and importance of the Cross, as well as the significance of the cross. He stated: “The cross has many symbolic meanings, the horizontal line depicted the worldly life, the vertical line depicted the divine life, and each person expresses the intersection and the cross.” He said that every Christian should carry his Cross like Jesus Christ.

At the end of the ritual, the souls of the dead were remembered in prayers and the clergy did a procession in the garden of the church with the deacons, accompanied by hymns. Here, the four directions of the world were blessed with cross, decorated with basil through Antasdan prayers.

What is TABNERNACLE FEAST – EXALTATION OF THE HOLY CROSS (HACHVERATS)?

The Feast has widespread popularity. It is not taken as a memorialization of a historical event; rather, it is a general Feast of the Cross, the Holy Cross.

Because it is a Great Feast, a Tabernacle Feast, it is preceded by a week of abstinence, and with a “Navagadig” (Inaugural). And the following day, a Monday, is Memorial Day.

The Feast is recognized in all Christendom. Generally, the other churches celebrate the Feast on September 14. The Armenian Church celebrates it on the Sunday nearest September 14, meaning that it can occur on dates from September 11 to September 17. Celebrating the Feast on a Sunday means working people will generally not be denied taking part in the celebration.

The Feast of the Exaltation of the Holy Cross memorializes the last of the episodes of the Cross as recorded in the history of religion, and as such it is universally recognized in all churches, as well as in the history of nations. The eight expeditions of the Crusades during the subsequent centuries were political actions concerned with the Holy Lands, to recover them from the Muslims; they had no direct concern with the Cross itself. The crosses worn by the soldiers from the several countries (hence Crusaders) were simply an emblem to identify them as a Christian army of liberation.

‘Are faith and science conflicting with each other?’