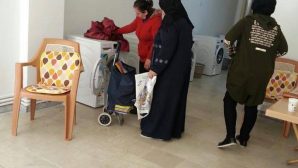 The Anatolian Christian Communities Association who is aiming to represent Christianity on a non-discriminatory basis of language, religion or race according to the will of Jesus has opened a free laundry facility in Kayseri for the solution of the cleaning problems of the refugees.

Muammer Karakaya, the leader of the Anatolian Christian Communities Association (AHD), said that since 5 years, Turkey is hosting the Syrian refugees by showing them great and the NGO’s also should also help the state.

Karakaya told to the Hürriyet newspaper that as Christian communities they thought how they could help the refugees who came to our cities. As a result of their research they found that most refugees have no washing machines in their homes and they are trying to wash their clothes in cold waters or in occasional public baths. The majority of the Syrians live in the district of Fatih neighborhood Kocasinan where they opened the laundry and since the first day the demands increase. Currently, with 5 machines, every day an average of 100 Syrian refugees are benefiting. Usually the women come with their children. Karakaya said that they are planning to do activities to entertain the children.

He also stated that they would launch a campaign in order to increase the number of machines in the laundry and ask for second hand clothes in order to distribute to the needy refugees. “We must provide contributions as NGO’s to refugees,” said Karakaya to SAT-7 TURK and continued “Jesus also was a refugee who had to fled his own house”.

The Delegate Voting of the 85th Patriarch Election of Turkish Armenians