Harutyun Şanlı, the President of the Gedikpaşa Surp Hovhannes Armenian Apostolic Church Foundation and the Secretary General of the Union of Armenian Foundations Deceased 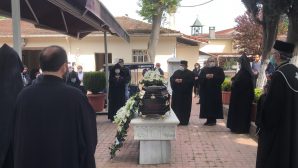 One of the well-known and beloved faces of the Armenian community, Mr. Harutyun Şanlı, the President of the Gedikpaşa Surp Hovhannes Armenian Apostolic Church Foundation and the General Secretary of the Armenian Foundations’ Association (VADIP) deceased on 6th May and was buried at the Balıklı Armenian cemetery.

During the ceremony, which did not take place under normal conditions due to corona virus, the close friends and loved ones, as well as the spouse and children of Mr. Şanlı were also present, maintaining the social distance.

The day after the funeral, Patriarch Sahak II. posted an video about Harutyun Şanlı on his youtube account. Tha Patriarch said:

A WORD OF PRAISE FOR HARUTYUN ŞANLI

A meaningful aphorism can be said precisely for Harutyun : “When you were born, everybody was laughing, only you were crying. Live so that everybody cries when you die, but you laugh, smile.”

Let this Word of Praise the Patriarch wrote for him travel from tongue to tongue. Let the lovers say: “Our valiant is dead. We are mourning.” May the tears of farewell become a flood and  get mixed with thousands of prayers. May they rise to the sky like flowers. May his tired soul find grace. May his sins be covered by the blood of Christ.

May new Harutyuns be born to our poor world. Amen .

Communications Chief Advisor to President Recep Tayyip Erdoğan, Mr. Fahrettin Altun, sent a message to the Patriarch Sahak II and later he published this message on his Twitter account:

“ I regret to know that the President of the Gedikpaşa Armenian Church Foundation and the Secretary General of the Union of Armenian Foundations, Mr. Harutyun Şanlı, died because of Covid-19. I extend my condolences to his family and the Armenian community, especially his wife, Mrs. Öjeni. ”