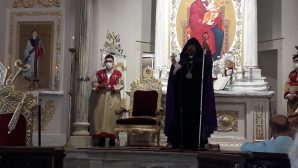 On August 9, Sunday, Turkish Armenian Patriarch His Beatitude Sahak II presided over the sacred offering rite in the Dzınunt Asdvadzadzni Church in Bakırköy.

Turkish Armenian Apostolic Church are continuing the rituals and broadcasting sermons and offering rites from the Facebook page of the Patriarchate’s social media accounts, during the post-pandemic period, while respecting the new normal circumstances with the measures taken.

On Sunday, August 9, Holy Presentation rituals were held in Armenian Apostolic Churches with religious officials and Hokehankist prayers were read for those who lost their lives in the explosion in Lebanon.

While the Sacred Offering Rite in Bakırköy Dzınunt Surp Asdvadzadzni Church was performed by Father Şahen Uhanyan, Turkish Armenian Patriarch His Beatitude Sahak II has also presided over the liturgy and preached. In his sermon he talked about Mark 2:3, how four friends brought a paralyzed person to Jesus Christ and the miracle that happened.

In Kınalıada Surp Krikor Lusavoriç Church, the Sacred Offering Rite was presented by Islands religious officer Father Harutyun Damatyan. Hokehankist prayers were read for those who lost their lives in the explosion in Lebanon. Afterwards, Father Damatyan gave a sermon from the reading piece of the day “Some men came, bringing to him a paralyzed man, carried by four of them.” (Mark 2:3) and he reminded them of the power of Christ’s divine words. Also, the Sacred Offering Rite that took place on Wednesday, August 5 and was broadcasted on the Facebook page of the Turkish Armenian Patriarchate was presented by Senior Patriarch Kevork Çınaryan. Afterwards, His Beatitude Patriarch Sahak II gave sermons both in Armenian and Turkish. He began his Turkish sermon by reading Mark 2:3, and he talked about the faith, hope and love of the four people who brought their paralyzed friend to Jesus. He talked about the importance of the faith of those four.

His Beatitude Sahak II Calls for Aid for Lebanon

Turkish Armenian Patriarch His Beatitude Sahak II called for aid for Lebanon through a video that he published on his Instagram page.

“It is a humanitarian duty for the members of our congregation to support our desperate Lebanese brothers and sisters and participate in the aid campaign launched around the world.”