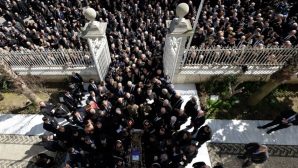 Turkey mourns Mesrob Mutafyan, or Mesrob II as he is formally known, the late Armenian patriarch who passed away on March 8. A huge crowd filled the narrow alleys around Surp Asdvadzadzin, the church of the patriarchate, in Istanbul on Sunday for a funeral ceremony for the beloved religious leader.

The funeral ceremony, which began on Sunday, March 17 at 8:30 am, was opened with the morning prayers. At 10:00, the Holy Mass started. The ceremony was led by Archbishop Arshak Khachadourian, the Chancellor of the Echmiyazin Church.

After the Holy Mass was completed, Patriarch II. Mesrob Mutafyan’s body was brought to the door of the Patriarchate with the clergy.

Patriarch II. Mesrob Mutafyan’s body was taken to Şişli Armenian Cemetery where he was bruied with a ceremony.

A Meaningful Sermon from His Beatitude Patriarch Sahak II