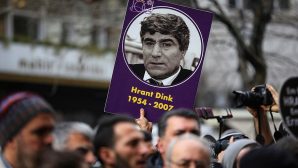 Editor-in-Chief of Agos newspaper Hrant Dink, who lost his life in an armed attack in front of what was then the building of Agos newspaper in Şişli, İstanbul on January 19, 2007, was commemorated at the time and place where he was assassinated today (January 19).

Before the commemoration ceremony started at 3 p.m., the street leading to the former office of Agos newspaper had been closed to traffic. The Governorship of İstanbul also announced that the Osmanbey Subway station near the commemoration site would be closed from 12 p.m. to 4.30 p.m.

People started gathering in front of the building as of 2 p.m. and chanted the slogans “Just to spite fascism, you are my brother Hrant” and “We are all Hrant, we are all Armenian.”

Prof. Dr. Şebnem Korur-Fincancı from Hrant’s Friends made the statement for the press of the 13th anniversary.

Fincancı said: “13 years ago, on January 18th evening, at a dinner table Hrant came together with Yavuz Önen, my dear brother, who was the president of the Human Rights Foundation of Turkey at the time. We all had our dreams. During that dinner, while, in the pursuit of our dream of an Institute, we shared the news of our training of trainers for ensuring effective investigation and documentation of violation of rights, he shared in great enthusiasm his dream of an Institute for Trauma and Human Rights. But then, on January 19th, 2007, at 5 past 3, time has stopped for all of us. We were perplexed, the warmth of the dreams we dared to cherish together still fresh in our hearts…We have never given up on those dreams, and with every step we made, we have arrived where we are today.”