Kind Behavior of the Greek Sportsman 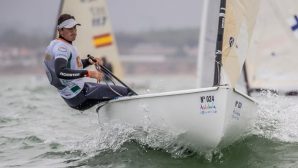 The Sailing Federation of Greece announced that it would raise the name of Panagiotis Iordanou for the International Fair Play Award, for lending his sail to the Turkish athlete Alican Kaynar whose the sailing pole was broken during the race.

In the sailing race between the Turkish and Greek sailors took place In 2018 Winter Games held in Greece, the kind behavior of the Greek athlete has been applauded.

National sailing athlete Alican Kaynar’s sailing pole was broken at the 5th stage of the race. Iordanou gave to Kaynar his own spare sail.

After finishing the 5th stage of the race with Iordanou’s sail, Kaynar finished the sixth stage and won the bronze medal.

After the race was completed, Iordanou gave the Greek press the following statement “I did this as an athlete whether he was Turkish or not. I don’t think of anything during the race, especially when I’m at sea. I’m a close friend of Kaynar.  I don’t have a friend that I am so sincere in my own race.”

Alican Kaynar explained to the Greek press that he did not expect such a kindness; “This behavior must definitely be a model for young sportsmen“ he said.

The Greek Sailing Federation, which has appreciated the behavior of the Greek sailing athlete, announced that it would raise the event for the International Fair Play Award.

Prayers for Turkey from all over the world

Sacred Week Rites are being broadcasted online from the Orthodox Churches