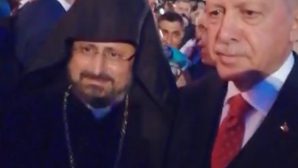 According to Istanbul-based Armenian Agos, Erdogan inquired of Bishop Mashalian about the process of organizing the election of the Patriarch of Constantinople.

The President requested information from the Minister of Internal Affairs Suleyman Soylu present at the meeting. The Interior Minister noted that within a week the government would publish the regulation.

It should be noted that on March 8, 2019, 84th Armenian Patriarch of Constantinople Mesrob II Mutafyan of Constantinople died, after which Bishop Sahak Mashalian was elected Patriarchal Vicar. Later, an initiative group was formed to organize and coordinate the elections, headed by Khosrov Koledavitoglu.