New “Death and Life” frescoes found in the Sümela Monastery 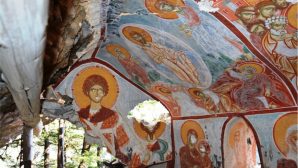 A new chapel is discovered during the ongoing restoration work in the Sümela Monastery in Trabzon.

The chapel is filmed for the first time and the experts believe that the monastery contains many other undiscovered chapels. This new area is located on the upper right slope of the northern roof of the monastery and is reached by a secret passage. On its walls there are frescoes about heaven, hell, death and life.

Ali Ayvazoğlu, the Provincial Director of Culture and Tourism, who gave information about the restoration works in the Sümela Monastery stated that the Sümela Monastery had been built in a cave on the slope of Karadağ in Altındere Valley and was a monastery where the monks were educated. It is used as a touristic site after 1924. Ayvazoğlu said “Sümela is a very mysterious place and it is situated on the 300 meters of altitude from the sea. Especially after the restoration, we will able to understand better its mystery and our visitors will be able to visit all its parts.”

Christmas with the Armenian Community of İskenderun