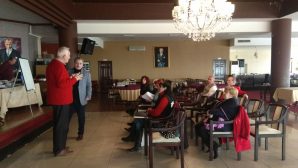 Nicomedia Tolerance Ensemble which is a branch of the İstanbul Dragos Tolerance Choir realized its first rehearsal at KYÖD Social Facilities.

The volunteer musicians of Nicomedia Tolerance Ensemble met in İzmit in January at the Kocaeli Higher Education Association. İstanbul Dragos Tolerance Choir Chief Serdar Taştanoğlu taught about how to sing Hebrew songs in the choir on the first day.

Nicomedia Tolerance Ensemble will sing Anatolian songs in the most spoken 42 languages in the last for 2 thousand years in this region. The choir which was founded by Chief Serdar Taştanoğlu, Nicomedia Academy Association and ÇEKÜL Kocaeli Provincial representative will perform for the first time on April 30, 2018 in Izmit at the Tolerance Awards ceremony which is being organized on behalf of the world-famous poet Özkan Mert.

Easter Celebration in the Armenian Churches in Antioch

The Feast of the Name of Jesus Christ is celebrated