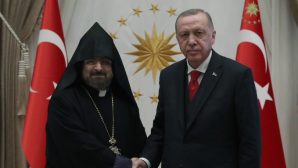 Patrik II. Sahak Maşalyan thanked on his behalf and on the behalf of the Armenian Community for the warm welcoming of the President. He also thanked for the support of the state during the election process. Following the death of the late Patriarch Mesrob II, the Armenian community had started the election process under the auspices of the state, and it was successfully completed. As a result of all this, the Armenian Community could elect its spiritual leader. At the end of the meeting, commemorative gifts were presented mutually.

After the meeting at the Presidential Palace Patriarch II. Sahak Maşalyan visited Minister of Foreign Affairs Mevlüt Çavuşoğlu and Ankara Governor Vasip Şahin, who also served as the Governor of Istanbul in the past.

During the visit, the Minister Çavuşoğlu and the Governor Şahin informed their satisfaction on the occasion of the Patriarchal election. They both wished success to the Patriarch in his new post.

Patriarch Sahak II and his delegation returned to Istanbul the same night by air.