Peace and Fraternity Messages Given in Saint Peter Church 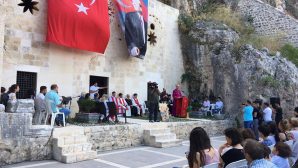 The Saint Peter Church in Antioch hosted also this year many Christian pilgrims for the occasion of the St. Peter and St. Paul Feast which took place on June 29th. St. Peter’s Church is considered the world’s first cave church.

The celebration was led by the Apostolic Vicar of Anaolia, Mgr Paolo Bizzeti. Orthodox priests of the city, Rev. Dimitri Yıldırım, Rev. Can Dellüller and Catholic parish priests coming from Antioch, Iskenderun and Mersin also attended.

A Eucharistic Celebration was held

Rev. Father Dimitri Doğum during his sermon said: “All of the religions give a message of love, peace and brotherhood. It is important to read these commandments well and understand them well. We are greeting the whole world from this beautiful city where the term of “Christian” is born. We are praying Lord Jesus Christ for this for beautiful country where we are living. May the pace come to the whole world.”

Later on, the Apostolic Vicar of Anatolia, Mgr. Paolo Bizzeti gave messages of peace and brotherhood in his speech. Monsignor Bizzeti paid attention to the fact that this region became even more important with the name of St. Peter and St. Paul.