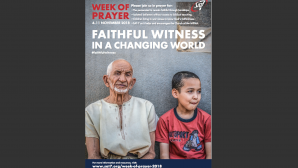 Hundreds of people from all over the world will attend the 8-day prayer chain.

“Loyal Witnesses in a Changing World “

While the theme of the 2018 Prayer Week is determined as “Loyal Witnesses in a Changing World”, any group which can come together as individuals or church communities can pray for the turmoil in the Middle East and North Africa and for the atrocities against Christians.

According to the statement published on the SAT-7 web site, Christians whose the faith had its roots in the Middle East and North Africa, remained faithful despite the conflicts and persecution they faced. So, SAT-7 Christian Television Ministries stated that it wants to encourage the believers living in these regions.  The prayer bulletin which is published on www.sat7.org web page suggests prayer topics for every day.

Among the major prayer topics there are Christians who are persecuted and remain faithful to their beliefs despite difficulties; people who cannot reach the Bible; centers and churches which give Bible education; children who are victims of war and trauma; and the SAT-7 organization’s goals for Middle East and North Africa to provide assistance and encouragement to churches.

As the SAT-7 family, let us pray together at this special Prayer Week between November 4-11.

New “Death and Life” frescoes found in the Sümela Monastery