President Erdogan is going to visit the Vatican 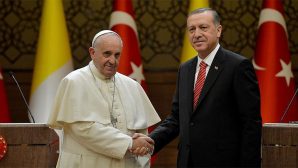 President Recep Tayyip Erdogan will visit the Vatican on 5th February to meet His Holiness Pope Francis. Erdogan will the first Turkish President of Republic to visit the Holy See since 1959.

Following the decision of US President Donald Trump to recognize Jerusalem as the capital of Israel, Pope Francis called to respect the “Jerusalem’s pre-determined status quo by UN resolutions.”

President Erdogan, called twice the Pope last month to speak about Jerusalem. According to the Anadolu news agency, Erdogan told Pope Francis that he appreciated his call to protect the situation in Jerusalem.

Erdogan also explained his intention to come to the Vatican to talk about the Jerusalem issue with the Pope, during a flight to the journalists at the end of December, and said, “If we can do a return visit, we may have a face to face meeting with the Pope.”

The Vatican Press Office said Erdogan’s meeting with the Pope will take place on 5th February.

Vatican Press Office Deputy Director Paloma García Ovejero said the Pope will accept Erdogan in the Papal Palace on the morning of February 5th. According to BBC news, sources close to the Vatican say that the request of the meeting came from the Turkish side.

In the last presidential level visit from Turkey to the Vatican was held in 1959, by the President Celal Bayar. Diplomatic relations between the Holy See and Turkey are established in 1960 and the embassies were opened after this visit.

Erdogan will be the first president to visit the Vatican since the diplomatic relations between the two countries were established.