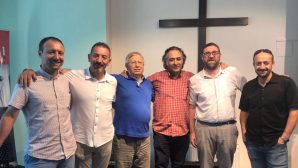 Association of the Protestant Churches in Turkey (TEK) chose a new president and board of directors at the Istanbul Bible House Church.

The Life Family Church Pastor Mr Ali Kalkandelen has been elected as the new president of TEK upon the voting of the protestant pastors.

A blessing prayer was held for Ali Kalkandelen who replaced Ihsan Ozbek, whose term of office was about 5 years.

Pastor Ali Kalkanderen who will be in this charge for 3 years said that he will work in particular in order to consolidate the place of Protestant Churches in Turkey and strengthen relations with the traditional churches. He emphasized that in actual events such as the dismantling of the signboards of the Protestant Churches, he would continue to guide the churches in the legl steps.

For the Board of Directors, Ramazan Arkan from Antalya Bible Church, Istanbul KUT Church Pastor Vahan İsaoğlu , Bible House Church PastorDr. Behnan Konutgan, TEK Press Spokesman and one of the pastors of the Liberation Church of Ankara Soner Tufan were elected too. It was decided Umut Şahin from the İzmir Karataş Church to continue his duty as the General Secretary of TEK.

Büyükada Rum Orphanage About to Collapse

Birth of Christ Celebrated in Mardin