Restoration started at the Virgin Mary Church in Kayseri 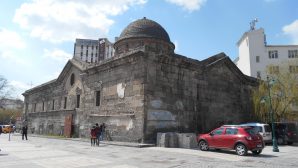 Kayseri Metropolitan Municipality started to the restoration work in the Surp Asdvadzadzin (Mary Mother) Church from the Ottoman period, used for years as a municipal police station and sports hall in the district of Melikgazi to convert it into a 24-hour open city library.

It was decided that the church would serve as City Library. More than 50,000 books will be found in this new institution, which will serve a specialized library. Individual and group work will be available in the library which will be open 24 hours a day where also electronic books and documents will also be accessed. A ‘Book Cafe ‘ will be available for the readers.

In the church, the ornaments, frescoes and letters under the plaster were uncovered with rigorous work.

Mayor Mustafa Çelik said “There not another example in Turkey where a former religious building was used as a library in Turkey. We are primarily doing the proper restoration here. Immediately afterwards, according to the project prepared, the building will be restored as a library. There will be cultural cafes, e-books and books for the visually impaired persons in this new library. According to our current calculations, the cost will exceed 6 million liras. I think this figure will reach 8 million with the books and the needed equipments”.

67 people were baptized in Bulgaria