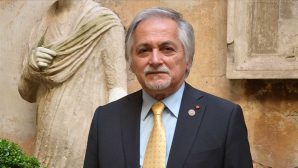 Turkey Catholic Bishops’ Conference Spokesperson and Cultural Attaché Dr. Rinaldo Marmara who works for many years in the Vatican archives, evaluated the Çanakkale Victory according to the Vatican documents.

Why Is Canakkale 1915 Book Important?

This book, whose full name is “Frank Coffee Case in the Light of the Vatican Secret Archive Documents on Çanakkale 1915” contains nearly a hundred documents that have never been published before.

What is the relation of the Vatican and the Çanakkale War?

In this book, I emphasize the respect of the Turkish soldiers to the other nations during the war, according to the Vatican documents.

The Papacy of the time followed very closely the Çanakkale War through its representative in Istanbul, Bishop Dolci. As the war continues, the Minister of War Enver Pasha orders his generals to respect the graves, this is why the Çanakkale war is also called “the war of gentlemens”. So, the archives of the Vatican show the kindness of Turkish soldiers in Çanakkale.

You are known through your works in the Vatican Archives. Does your Levantine origin help you with your work?

In fact, it is not important to enter the Vatican archives. It’s important to find the right document when you enter. The cataloging work is not done and the shelf length of the archives exceeds eighty kilometers. My goal is to bring the Vatican archives to Turkish historians. English language does not help to read documents in the Vatican archives related to Turkey. You need to know Italian and French very well. You may need to switch from one language to another language; for example, the answer to a letter in French letter can be in Italian or vice versa.

Can you please tell us about your books which consist of Vatican archives?

I usually prepare my books by collecting unpublished Vatican documents. For the convenience of Turkish researchers who do not know French and Italian, I have started a cataloging work of the documents in the Vatican archives. Researchers will be able to access the source they want from the catalogs in Turkish. The second stage of this work will be to publish the documents which will be catalogued. I aim to give Turkish researchers a series of useful catalogs. I’m still working on this new project. In the past, I have published two books, consisting the copy of documents.

Thousands of people flocked to Aya Yorgi Church in Büyükada