Roman Church Found During the Excavation in Çanakkale 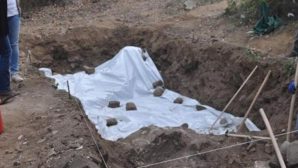 Immediately after the official excavations started last week, the ruins of church and mosaics at the base are found. When the treasure hunters started to visit the area last year, the villagers informed the gendarmerie forces of the situation.

Çanakkale Museum Directorate started an official excavation in the region last week following the increase of complaints, and the villagers are actively involved in the excavation conducted by 3 archaeologists.

THE PEACH GARDEN IS NEIGHBOR WITH THE SKEPSIS ANCIENT CITY

The peach garden where the ruins are found is just one kilometer away from the ancient city of Skepsis drew attention. It is known that a diocese was located in this city. (HT)

Archbishop Aram Atesyan participated in the ‘Living Together’ Panel in Antioch

The Patriarch Kirill of all Russia and Moscow visits Istanbul

Ecumenical Patriarch Bartholomew I: “The Theological Seminary of Halki will be Reopened”
ZİYARETÇİ YORUMLARI