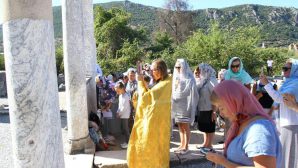 The Association of Russian Language and Culture in Izmir and Russian Orthodox Church organized a Religious ceremony in the ancient city of Ephesus, at the ancient Basilica of Virgin Mary for the Russian Christian faithful residing in Izmir, in collaboration with the Culture and Tourism Ministry of Turkey. More than 100 Russian speaking faithful participated in the service, which was held on September 22nd. Father Georgiy Yury Sergeev presided the Holy Liturgy about 1,000 years later in the same place.

After the ceremony, Father Georgiy Sergeev talked about the church where the ritual took place where the 1st Ephesus Council took place in 431 AD. He also emphasized the importance of the religious teachings accepted at the council meetings. Father Sergeyev thanked Solzhenitsyn Russian Language and Culture Association, President of the Association Andrey Ponomarev and founder Natalia Kuznetsova-Karaman, who helped organize this trip. The Association of Russian Language and Culture in Izmir Chairman Andrey Ponomarev stated that the celebration has been possible thanks to the Church of the Moscow Patriarch and Turkey Culture and Tourism Ministry’s support. “This is the first time we have organized such a large organization” he said.

The Number of Russian Speaking Residents Exceeds 10,000 Only in Izmir

Ponomarev said, “We will now perform these rituals regularly 4 times a year. But we have no place to worship regularly. We don’t have any Russian Orthodox churches, except the consulate in Istanbul. We were going to Greek churches before but after the tension between Ukraine and Russia we cannot go here.” Ponomarev, pointing out that the number of Russian people living in Turkey gradually increases, said “We love this country and its people so much. We made great friendships. The relations between Turkey and Russia is developing with each passing day. The number of Russian-speaking residents in Izmir alone exceeds 10,000, but we do not have a church despite the large number.”

Ponomareva said that they expect support from Izmir Governor’s Office and the Metropolitan Municipality, stating that “There are many empty churches in Turkey. Although we have a high Russian population, we do not have a church. As the Russian Language and Culture Association, we applied to the Metropolitan Municipality to solve this problem. Governor Erol Ayyıldız was closely involved in this project. We hope that the Mayor Tunç Soyer will not be insensitive to our problems.” Ponomarev underlined that if the problems are solved, Russian tourists will get more attention in Izmir and: “Mosques are being built for Muslims living in Russia. Orthodox Churches can be opened in such big cities. And we don’t have graves. We send our deceased citizens to Russia. But we live in Turkey, and our children are born here. We would be happy to have our graves here”, he said.