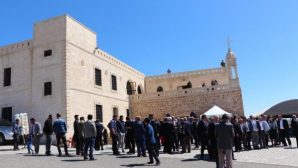 In the village of Arica, which belongs to the Gercüş district of Batman , the Mar Aho Monastery ofSyriacs, which was built in the 6th century and went to ruin in the last century , was repaired and opened for worship services after 100 years.

The priest Daniel Savci, who attended the opening ceremonyof the monastery, said that the church walls had been standing since the sixth century. Father Savci said: “This monastery was rebuilt with the contributions of the Arica village, the Assyrians who are Europe and the Turkish State.

Governor Ahmet Deniz spoke at the opening ceremony. He said: “Batman is home to many civilizations, a geography where Yunus Emre, Hacı Bektaş, Mevlana’s love and tolerance seeds are laid. We see our differences as wealth. Because we live on a world empire. Of course we will have differences; members of different denominations, members of different languages, belonging to different ethnic groups. The important thing is that we are together.”

After the opening ceremony, the Assyrians from the Netherlands and those living in the village of Arica burned candles in the monastery after 100 years.

Historical Church to be transformed into the City Museum after Restoration