Sümela Monastery will be opened to visits after 3 years 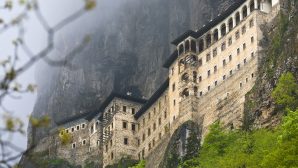 Sumela Monastery which is Turkey’s one of the most important historic places will be open soon to visitors after 3 years of restoration work. The monastery will be opened this month partially. It will be open to visitors completely by next year. The chapel and the monk cells which can be reached by a secret passage in the upper right pit of the northern roof, will be also opened for the first time.

In the monastery, a large part of the ‘slope improvement’ work, which is carried on by a team of industrial mountaineers, has been completed so that the rocks and ice masses do not fall. The teams carried out 79,000 square meters of field cleaning in three stages of work.

During the restoration work, a new area has been discovered. This area is reached by a hidden passage in the upper right slope of the northern roof. In this area which consists of ‘chapel’ and ‘monk cells’ some frescoes about ‘heaven and hell, death and life’ have been also found. The damaged frescoes and roofs are being repaired and a 30-meter-high road construction is being planned.

Ali Ayvazoğlu, Director Culture and Tourism of Trabzon, announced that the first part of the monastery will be opened this month and it will be open completely to visits by next year.

Ayvazoğlu stated that there are 10 chapels in the monastery and he added: “Only one or two of these were open for touristic visits, but there are also mall chapels which can be reached through small tunnels. There were some passages which one person could stand in. These passages have been enlarged and became accessible. Many new areas in the monastery are discovered and open now. A small chapel that can be reached by walking about 15-20 meters from the end of the roof, which is called “mysterious chapel” is also open. Despite the destruction of time and the nature conditions, Sümela Monastery is serving to the tourism of the region with its 1700 years of history. We need to transmit this monastery to the future generations.”

Ali Ayvazoğlu stated that despite the restoration work in the monastery, the number of tourists reached 250.000 this year. Although the Sümela Monastery is closed, the tourists visit the National and the Ayasaray Church, which is very close to the monastery.

In the Armenian Apostolic Churches, the Sacred Offering Rite was Performed Publicly for the First Time After 4 Months

The ‘Antioch is different in Festivities’ Photo Exhibition Drew Interest