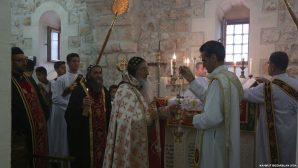 In the Midyat district of Mardin, the parish priest of Mor Iliyo Church, Rev. Fr. GabrielAktas has been elevated to the rank of “Horoyo” through a specialceremony. Aktaş became the first priest to be appointed to this position after 12 years.

It is known that this task is equivalent to the position of the assistant of the Bishop.

Rev. Fr. Gabriel Aktas said: “Today we are very happy and very pleased. On one hand our nation, on the other hand, close relatives, all of them are very happy to be gathered here.”

Şükrü Aktaş, Board Member of the Mor Gabriel Monastery Foundation, expressed his feelings: “Today is an important day for both our village and the region of Tur Abdin. Last Horoyo passed away in 2006. After him, no priest was elevated to this rank in our region. After the liturgy led by Mor Gabriel Monastery Metropolitan Reverend Samuel Aktas, Fr. Gabriel Aktas was elevated to this rank. It is an important and historic day for our peasants and for our relatives.”

The Metropolitan of Tur Abdin, Timotheos Samuel Aktaş led the celebration to which hundreds of believers attended.

It is known that approximately 150 Assyrians live today in the village of Alagöz, named in Syriac “Beth Kustan”.While there were 130 households in this village in 1965, the number of households decreased due to migration to Europe in the early 1970s. The MorGabrielMonastery is named after the Syriac Patriarch Mor Gabriel, who was born in Alagoz Village, which is estimated to have lived in the 600. Alagöz village is 15 kilometers away from Midyat district of Mardin.

The Candidate for 85. the Armenian Patriarch of Turkey, Bishop Sahak Maşalyan met with his delegates