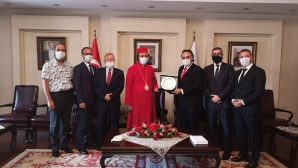 During the visit, which took place in a very friendly and warm environment, Assyrian Metropolitan Yusuf Çetin and the Board of Protestant Churches Association discussed the necessity of bringing closer relations between churches by addressing the topic of dialogue and unity between churches.

Istanbul and Ankara Syriac Orthodox Community Spiritual Leader and Deputy Patriarch Metropolitan Filüksinos Yusuf Çetin gave information to the members of the Board of Protestant Churches Association about  the continuing  construction of the Assyrian Orthodox Church in Bakırköy, Istanbul. Metropolitan Çetin stated that he wanted a close relationship between the churches and that the necessity of unity between believers was also stated in the Bible.

Following the visit, Pastor Ali Kalkandelen, Term President of the Protestant Churches Association, presented  metropolitan Çetin with a plaque in memory of the day with the verse from the Bible; “  There is one body and one Spirit, just as you were called to one hope when you were called; one Lord, one faith, one baptism; one God and Father of all, who is over all and through all and in all.” (Ephesians 4: 4-6)

The last meeting between the Protestant Churches Association, the Spiritual Leader of the Istanbul and Ankara Syriac Orthodox Community and the Deputy Patriarch, Metropolitan Filüksinos Yusuf Çetin, was during the “acquaintance visit” 3 years ago. (Seyfi Genç)