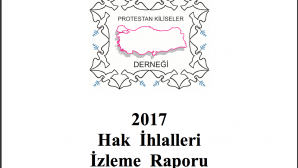 The Association of Protestant Churches of Turkey released, like every year the Human Rights Violations Report. It has been stated that the threats, pressures and the right violations increasingly continued also in 2017.

The summary of this year’s report:

In the 2017 Human Rights Violation Report, the important titles were: hate crimes and speech, verbal and physical attacks; problems related to places of worship, the right to propagate religion, problems faced in education and compulsory religious class, the problem of training religious leaders, legal entity / right to organize, discrimination, media, dialogue and recommendations.