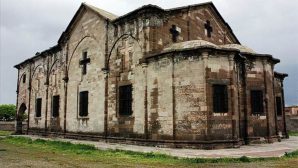 The Church which is built upon the will of the Ottoman Sultan Abdulmecid in the Derinkuyu district in Nevşehir which is famous with its underground city needs restoration. The church, consecrated on 15thMay 1858 is turning into a ruin with its wall writings and locked door.

The Mayor of Derinkuyu, Ahmet Balcı gave information about this church which is an important cultural and religious heritage. Balcı, said “Üzümlü Church (Ayios Theodoros Church) was built during the reign of the Ottoman Sultan Abdülmecid Han and was opened on 15thMay 1858. This church was built with the financial assistance of the people of Malakopi. The former name of our town, Derinkuru is Malakopi. This church needs restoration as soon as possible. It is now closed. Due to the fact that it belongs to the Ministry of Culture and Tourism, we have requested several times in official writing to give the church to my municipality. However, we received negative response. They did not transfer it to our municipality because it looks like a church in use. If it was handed over to our municipality, we would have made the restoration and open it for tourism.”

On stone legend of the church it is written: “This very holy church which is dedicated to Ayios (Saint) Theodoros Trion is built during the Emperor Sultan Abdulmecid Khan’s reign, with his high will, with the encouragement the (Metropolitan) Neofitos of St. Ikonion and with the donations of the Christian residents here(Malakopi)by the efforts of the chief architect,Kyriaco Papadopoulos Efendi from Haldias. It has been dedicated toSaint Theodorus and has been consecrated and opened. May God protect this country from all danger through his (of Ayios Theodoros’) intercession. Amen . The year 1858 May 15th.

At the time of the Greeks in the region, the religious ceremonies were held in this church every year with the participation of the Greek Orthodox Patriarch.

There are countless churches in Cappadocia where it was an important Christian settlement in the past. Many of these are also very old churches that are hidden underground or in caves. Saint Theodoros Church (Üzümlü Kilise) is considered quite new as it has a beautiful architecture and a nice bell tower on the ground.

There is a 3-part narthex on the front of the church, and it has 3 apses. They are outboard, semi-circle from inside and very frontal from the outside. The apse and the naos part are covered with domes. The structure is properly cut stone. The front has closed belts and cross-shaped windows. In the garden there is an independent bell tower.

Easter Celebration in the Catholic Community in Istanbul

Easter Celebrations in Malatya and Elazığ