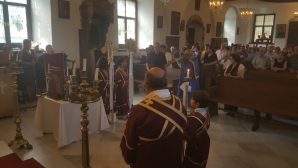 The celebration of the Feast of the Exaltation of the Holy Cross took place in the Greek Orthodox Church in Mersin.

After the Roman Empire accepted Christianity as the official religion in 325 AD, the mother of Emperor Constantin, Saint Helen and Roman soldiers started to search the Holy Cross beneath the Temple of Venus. On 14 September, three crosses are found during the excavations. However, the Empress and the soldiers were hesitant for which one was the Cross of the Lord Jesus Christ. Makarios, the Patriarch of Jerusalem stops a funeral convoy which was passing at the moment, and holds all three Crosses upon the dead. The dead man comes alive and revives with one of the crosses through the miracle of the Lord. So, the wood of that cross was solemnly brought to Constantinople and put under protection. This event is remembered every year on September 14 in many churches.

A large group of people attended the celebration in the Greek Orthodox Church in Mersin and a special rite was held at the end of the mass with a cross adorned with basil flowers. After that rite, the blessed basil flowers were distributed to the faithful.

License for the First Church of the Republican History