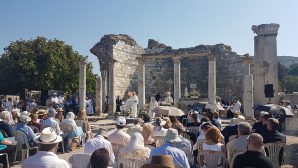 The Feast of Theotokos was celebrated on Sunday (October 13th) on the ruins of the Virgin Mary Church – Council Church – located in the ancient city of Ephesus, Selcuk.

Many priests and pilgrims from all over Turkey but also from different countries and continents – Slovenia, Italy (Dominican Church of the Rosary of Naples), Austria, France, Spain, Brazil, United States, Hong Kong, … – have took part in this very special festival.

In his sermon, Monsignor Bressan said, “The Church we are in now leads us back to the early discussions about the central role of Christ in salvation. Such discussion endured until the end of the famous Ephesus Ecumenical Council of 431. In the Council, the Mystery of the Incarnation of Jesus in Mary, in both human and divine nature was declared. As a result, the tradition that had given Mary the name of “The Mother of God” (Theotokos) was legitimized and was based entirely on the fact of incarnation. When around 200 bishops gathered here – after the dramatic sessions – on October 11, Mary declared this fact and confirmed her title.”

During the celebration, the choir of the Notre-Dame de Lourdes Church in the Göztepe neighborhood of İzmir added color, while Frere Giuseppe, the priest of the Alsancak Dominican Notre-Dame du Rosaire Church, played organ.

In the afternoon, the participants attended the ceremony and went to the Virgin Mary’s House to pray. (SAT-7 TÜRK/Nathalie Ritzmann)

Etiketler: Council Church in Ephesus / The Feast of Theotokos