The Festival of Saint Translators was Celebrated with the Holy Mass 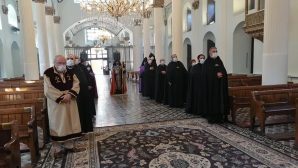 St. Translators (Tarkmançats) Feast, Patriarch of Armenians of Turkey was celebrated with Patriarch of Kadaset Sahak II presided over the holy mass.

While the Holy Offering was realized by the hand of the High Priest Yeghishe Uçkunyan, the deacons of the church served the table of the Lord. The hymns were voiced by the religious officials attending the ceremony. At the end of the ceremony, His Beatitude the Patriarch gave a sermon on the Festival of Saint Translators. Then the Priests, educators, and literati who slept in the Lord were commemorated with prayers.

A hundred years later,  a great danger was expecting The Armenian nation, who converted to Christianity in 301, There was a problem of dissolution and assimilation through religion among other Christian nations. Because the holy masses were realized not in Armenian, but in languages such as Greek Aramaic, Syriac, and Chaldean. It was not possible to read the Bible in Armenian. The only thing done in Armenian were sermons. The danger increased with the disappearance of the Armenian Kingdom, especially in the west of the Euphrates River, in Cappadocia and Eastern Anatolia. Since the Church is the only institution that embraces all Armenians, it was up to it to solve this great problem. The Catholicos of the time Sahag Bartev, the King of Eastern Armenia Vramshabouh and Mesrop Vartabed started a groundbreaking work.

They agreed to create a new alphabet for Armenian, to translate the Bible into Armenian and to realize the holy masses in Armenian.

Mesrop Vartabet was one of the greatest religious scholars of the time. He knew many foreign languages. Although he first tried to adapt the other alphabets to Armenian, he could not find a suitable alphabet to give all the sounds in Armenian, so he decided to invent it.

After long efforts, with the help of God, he found the alphabet (404-406) and translated the Bible into Armenian with his disciples. This new article began to be taught with great excitement and enthusiasm. The new alphabet turned into the most important cultural element uniting the dispersed Armenians. (Excerpt from the Episkop Sahak Maşalyan article of Agos Newspaper dated 7 October 2016)