The Resurrection of Christ Celebrated in Diyarbakir 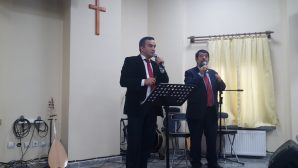 Christians living in Diyarbakir celebrated Easter with the program they have prepared.

Diyarbakir Protestant Church in Diyarbakir’s Sur province hosted the Easter celebrations which are attended by the church members, as well as many guests. The event began with a video about Christ’s resurrection. Then the hymns were sung in Turkish and Kurdish. After the hymns, there a short theater presentation is performed by young faithful of the Diyarbakir Church.

Following the shows İlyas Uyar, one of the pastors of the Diyarbakir Church, shared a story about the love and resurrection of Christ. The share of İlyas Uyar was as follows:

“What does Jesus Christ teach us? He said that when he came, he said: ‘Repent. For God is coming, and Lord’s sovereignty is about to come.’ He was talking about such beautiful things. Those who are called are those who are poor in the Spirit, those who are old, those who are mild, those who are hungry for righteousness, those who are merciful, those who are pure in heart, those seeking peace, those who are persecuted for righteousness. Do you have any of these among you? I believe that everybody wants these. And all who came to Jesus were those seeking them, those whose soul was poor, those seeking God, and those who wanted to know God. He taught things that you did not hear before. For example, he was talking about love, but it is not a love that we know but a different love. Because this love is a love for the enemy. A love that for the ones who hate you. For example, he was talking about the showy religiosity. He said, ‘Give charity to someone for this reason, do not do it in a showy way. Do it from your heart. Do whatever you do from the heart. ‘ He was talking about talking to God. About praying, he said: ‘Do not be like hypocrites when you pray. They have enjoyed being able to stand and pray in the streets and in the corners of the streets, for everyone to see themselves. I tell you the truth, they have received their awards.’ About fasting, he said: ‘When you fast, do not look like hypocrites. They give themselves a shabby appearance to show people that they are fasting. I tell you the truth, they have received their awards.’ Such things were taught that the people of Israel and the whole world did not know before. They were all doing the things for show. The people wanted to seem pious just for appearance. He wanted to people to pray in their hearts. Well, you know what happened after that? They killed him. Do you know why? People are sinners. And they do not want to see their sins in their lives. Whomever you ask on earth, everyone speaks of love, respect, understanding, goodness, mercy. Well, I’ll ask you a question; Why are there wars in the world and man is persecuting man? It is the sin that we have in our body and try to get rid of. It is not possible to get rid of it. You may want to be a very good person. And on those days when they killed Jesus, they wanted to be a very good person. Jesus Christ is the only Lord who can help you to get rid of your sins. And He invites you. He would have invited you 2000 years ago, at the time before he was killed. Is there anyone who has heavy burden among you?

Christ calls you. He wants to take off your burden. In John 14: 6 it is written: ‘Jesus said, I am the way, the truth and the life’. No one can come to my father without me. ‘Are you looking for the way? Do you want to know the truth? Do you want to find the life? Jesus has been distributing it for 2000 years, free of charge. Do you know that Jesus Christ is stronger than we see? Because He has a power that no one else has in this world. The power of sacrificing his own life. For you, for me. Everyone on earth comes to Christ for this power. Because they know that no one loves them so much except Jesus Christ. Christ has another power on earth that no one else has. The power of upon the death, for coming victorious on it. A believer in Christ, a person who accepts that Christ is the savior come to Him for these two powers. To the power of love and the power upon the death. People refuse to believe that Jesus died and gave his life. And that is why we say it again every year, the Christ is Risen, indeed Risen.”

After the sermon, the guests came to the church hall and congratulated each other.

Commemoration of the Dead in İskenderun

TeK (Protestant Churches’ Association in Turkey), issued a statement about the rising tension between India and Pakistan