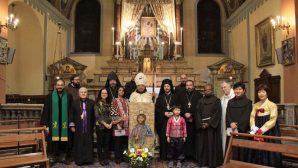 The Week of Prayer for the Unity of Christians began at the Church of Santa Maria Draperis in Istanbul.

The Prayer Week for the Union of Christians, where different churches came together and pray together like every year, began on Saturday evening in Istanbul. The week started with the ceremony in Turkish led by the Apostolic Vicar for the Latin Catholic Church in Istanbul, Mgr Ruben Tierrablanca at the Santa Maria Draperis Church.

The Gospel is read by Father Şirvan in Armenian, by the Great Archimandrite Vissarion in Greek and by Pastor Cem Ercin in Turkish. Later Mgr Orhan Çanlı read from the Matthew.

Mgr. Ruben Tierrablanca, in his sermon told about the meaning of the Prayer Week for the Unity and later prayers were read in different languages.

When the prayer section was over, all the participants were invited to a cocktail in the church hall.

The themes and programs of the following meetings are: January 21st at the Dutch Chapel (Union Church) ‘He is no longer a slave, but a dear brother’   January 22nt at he German Evangelical Church ‘Your body is the temple of the Holy Spirit’ , January 23rd at the Aya Dimitri Greek Orthodox Church ‘Hope and healing’   January 24th at the Bible House Immanuel Church ‘Listen to the wailing of my people from the farthest corners of the country’ , January 25th at the Meryem Ana Syriac Orthodox Church ‘Watch out for the benefit of others’   26th January at the S. Levon Armenian Catholic Church ‘Building the family around the church’ , January 27th at the Surp Asdvadzadzin Armenian Catholic Patriarchal Cathedral ‘He will gather the scattered ones from all over the world’.

Prayers for Turkey from all over the world