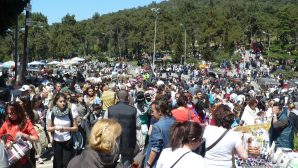 Every year on April 23rd, many people visit Büyükada for the feast of its Patron Saint, St. George.

Every year a large number of people, including the Greeks and the Isles, are attending the festival, which takes place on April 23rd at the Büyükada Aya Yorgi Church. All precautions are being taken by the security forces in the island which has been the scene of overcrowding in the past years.

As many as 20 thousand people are expected to come to Büyükada on this special day, there will be many Christian groups in Büyükada this year as well. Many volunteer Church members will be in the island to share the Good News and pray for those who wish. In addition, gifts related to the Bible and Christianity will be distributed free of charge.

The event, which is held twice a year on April 23 and September 24, will be held this year on Saturday April 21, Sunday April 22 and Monday April 23, due to April 23 is a Monday.