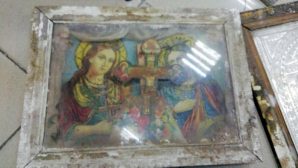 The treasure hunters who had excavated to find burials in Aya Yanni (Saint John) Church, which they secretly entered in Istanbul Fatih district and stole a painting with a very high financial value, were caught by the police.

The treasure hunters dug the ground of the church and searched for burials in the church’s rite. The incident occurred at noon last Thursday in the church on Mürsel Pasha Street.

The Istanbul Police Directorate was informed that a painting of a very high value of the church was stolen. The Police, who started the investigation, found that the painting was offered for sale in an antique store in Fatih Ayvansaray District. The Police went to whop as a buyer and detained antiquarian Hakan Ç at the meeting place. The painting stolen from the church was also seized and taken under protection by the police.

Another suspect named Bayram T. was caught. When the investigation was deepened, it was determined that the suspects were members of an organized network. Along with Bayram T., who excavated and searched for burials, Selim Ö. and Sefa B. was also caught. A total of 10 suspects who involved in the case were taken into custody and the suspects were sent to the courthouse after their legal proceedings at the Istanbul Provincial Police Department. In the first examinations made inside the church after the incident, it was determined that there was an excavated area of one meter in diameter and one meter in depth. Detailed investigation continues in and around the church.

Ecumenical Patriarch Bartholomeos thanked the Istanbul Police for this successful operation in which 150 years of historical artifacts stolen from Aya Yani Church were seized in three hours.

While all of the suspects who were released under the condition of judicial control were caught, 150 years old historical works stolen were found in just 3 hours and delivered to the Ecumenical Patriarchate without any damage. (Sabah)