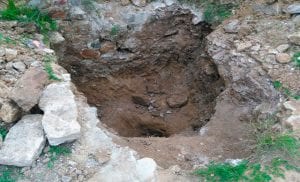 While the restoration work is being neededfor the 248-year-old Çamlı Monastery (Taksiyarhis ta Camya) located in the Ayvalık district of Balikesir which is registered as 1st degree archaeological site, the interior of the building destroyed by the treasure hunters.

It was alleged that illegal excavations were continuously carried out by the treasure hunters at Çamlı Monastery, located on the northern side of the highest point of Cunda Island. The monastery on the 1.5 acres of land located in the Ayvalık Islands Natural Park was registered as the 1st degree archaeological site in 2005 with the decision of the Conservation Board. Taylan Köken, who conducted a research on the recent history and archeology throughout the country and on Ayvalık, stated that necessary precautions were not taken for the protection of the monastery and that the destruction was also growing due to the increasing illegal excavations in the monastery where he is visiting occasionally.

Taylan Köken said that he saw the new pits formed due to illegal excavations in the monastery in 2 weeks. “Destruction is constantly increasing. The treasure seekers dig the chapel entrance and inside very deeply. Using a mattock, a hole 6 meters deep was opened. This poses a grave threat to those who come to visit. Treasure hunters are trying not to leave a trace around. Illicit diggings concentrate in a certain area. When they reached the sets made to flatten the monastery, they left the excavation. If the security measure will not be taken, they will come again and dig. “

Köken stated also that cultural heritage can be protected by the appointment of archaeologists, saying “These are our cultural heritage, we do not own them. We are just people who temporarily have to protect them and transfer them to the future. The detector sales must be absolutely prohibited in Turkey. The government can block everything when it wants. This cultural heritage can be protected by the appointment of archaeologists. It’s a bit of a hassle, but it will come back to us as tourism. Ayvalık has come to mind with its architecture today. Ayvalık is not only sea, nature and olive oil; you also define it with the cultural architecture. Not only Ayvalık, but the entire Edremit Gulf is being destroyed. Turkey is an outdoor museum. We have to transmit this heritage to our children and to our grandchildren. “

Archbishop Ruben Tierrablanca Was Sent Off On His Last Journey

The Last Sermon of 2020 from Patriarch Sahak II