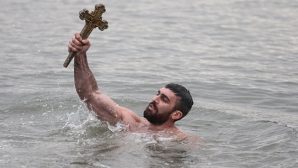 Members of the Greek Orthodox community marked the birth and baptism of Jesus Christ Monday with Epiphany, which is marked with a ritual of retrieving a cross from the water. Braving cold weather as storms and heavy winds battered Istanbul, swimmers jumped into freezing waters to retrieve crosses.

The culmination of the religious services was outside Fener Greek Orthodox Patriarchate on the shore of Istanbul’s Golden Horn, or Haliç. After a religious service at the patriarchate, Patriarch Bartholomew, who oversees a massive congregation spread throughout the world, walked to the shore and tossed a wooden cross into the sea after reciting prayers. Nikolaos Solis, who came from Greece’s Agrinio to compete to grab the blessed cross, managed to retrieve it. It was the fourth time he managed to retrieve the cross in the annual ritual. The patriarch released doves symbolizing peace after the ritual..

Similar Epiphany rituals were performed elsewhere in Istanbul where the Greek Orthodox community is concentrated.

A ritual was held at the Greek Orthodox Ayios Yeorgios Church in Kuzguncuk.

The ritual held at the Saint George Patriarchal Cathedral was led by the Ecumenical Patriarch Bartholomeos.

After the ritual, which lasted about 5 hours, the participants walked to Fener Pier on the Golden Horn shore in cortege in order to attend the cross-throwing ceremony.

Here, after the prayer of Patriarch Bartholomeos, those who waited on the boats to get the cross thrown into the sea jumped into the sea. Nikolaos Solis who came from Agrinio, Greece removed the cross.

Greek man lost consciousness and had to be pulled out of the frigid water and taken to an ambulance.

The Cross-Throwing Ceremony in Yeniköy

A ceremony was held for the epiphany in Sarıyer, Panayia Greek Orthodox Church. The ritual was directed by the Metroplitan of Murefte, Irineos Yuanidis. After the mass, visitors landed on the Sait Halim Pasha Yalisi pier to watch the cross-throwing ceremony. After the prayers of Metroplitan Yuanidis, the cross was thrown into the sea. 4 people jumped into the cold waters of the Bosphorus to remove the cross. Kostandinos Mousouris was the first to take the cross from the sea.

One of those who jumped into the sea to remove the cross could not get to the pier. The Coast Guard teams helped him to get out of the water.