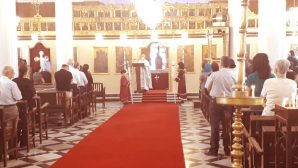 Yusuf Nicholas Papasoğlu, Lebanon Balamand University St. John of Damascus Institute of Theology graduate directed his firs ritual at the Saint Nicholas Greek Orthodox Church. Papasoğlu said that he was thankful to those who helped him throughout the time until he was assigned in İskenderun.

Yusuf Nicholas Papasoğlu who acquired the “Spiritual Leader” identity with the Deacon and Priesthood ceremonies held in Lebanon, started his duty in İskenderun. Father Papasoğlu, performed his first ritual with the Father of the Church, Dimitri Yıldırım. And he appeared very excited in his speech to the Iskenderun Congregation. 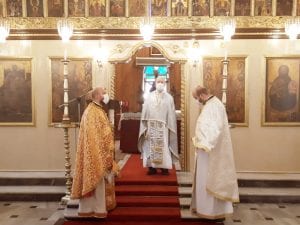 In his speech Papasoğlu thanked everyone who has been with him since the beginning of his theology education by saying; “I thank you for not leaving us alone in such a special day. I would like for my assignment as the Deacon and Priesthood which took place in Lebanon to be in our Church of Saint Nicholas, who i am named after. But this was not possible due to the pandemic. My assignments as a deacon and priest were carried out by the blessing of our Patriarch John the 10th in Lebanon and by the hand of the Archbishop of the Lebanon monastery of Saint Elijah, Constantine Kayal.

I would like to thank, my family and all my teachers who contribuated to my education during my stay in Lebanon. I also thank Can Teymur, president of the İskenderun Saint Nicholas Orthodox Church Foundation and the members of the congregation who provided full support financialy and morally after the education process. I would like to express my gratitude to the fathers and congregation presidents of Altınözü and Antakya Churches for their contribution and support. May my God make me worthy of you in this mission.” 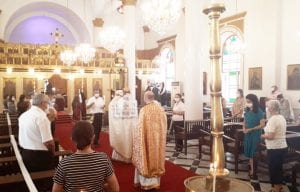 Father Dimitri Yıldırım wished Father Papasoğlu success in his new position, highlighting the young father would serve the Saint Nicholas Orthodox Church for years and he was happy on behalf of the Iskenderun community.

The appointments of Papasoğlu as a Deacon and Priest were carried out in a special ceremony at the Saint Elijah Monastery in Lebanon with the blessings of the Patriarch John the 10th of Antakya and the entire Middle East, and by the hand of the Archbishop of Lebanon Saint Elijah Monastery Constantine Kayal. The Deacon and the Priesthood appointment, which was planned to be held in Iskenderun with a magnificent ceremony, was postponed for a while due to the Coronavirus that affected the whole world.