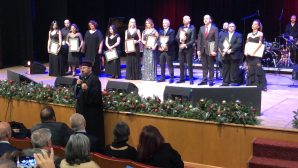 On the evening of December 26, a fundraising concert was held in Cemal Reşit Rey Hall for the benefit of Getronagan High School.

Getronagan High School, one of the leading schools of the Armenian community, which was in economic problems in the last year, was helped through the selling of tickets of this big concert. Sarven Muradyan and the well-known artist Bartev Garyan, together with well-known musicians and soloists of the Armenian community took part in the extraordinary show where tickets were sold out 15 days ago.

Sarin Akbaş and Boğos Çalgıcıoğlu were the presenters at the music festival which started at 21.00.

In the beginning of the second part after the interval, the 85th elected Patriarch of Armenians of Turkey Sahak II. Mashalyan entered the hall. The concert hall was completely full of the art lovers. The Patriarch was applauded in his entrance and he embraced the spiritual leader of Turkey’s Armenian Catholic Community, Archbishop Levon Kerabayzar Zekiyan.

At the end of the night, the elected Patriarch II. Sahak Maşalyan thanked those who contributed to this meaningful event and invited Sarven Muradyan, the owner of the idea, to the stage and thanked him.

The night ended with the collective photo shoot of the artists.